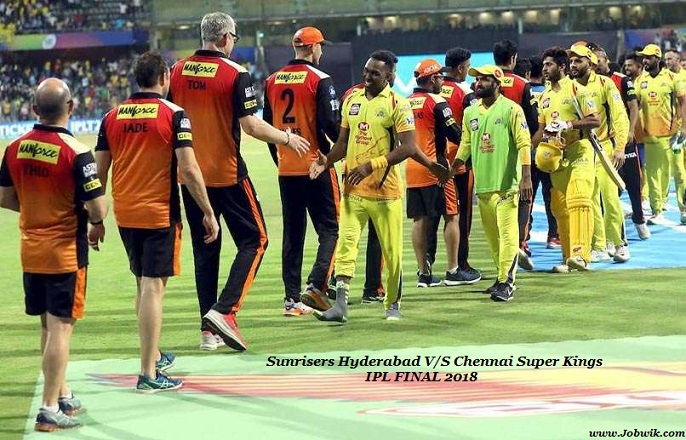 Who Will Win Sunrisers hyderabad vs Chennai super kings FINAL IPL 2018 . Sunrisers Hyderabad and Chennai Super Kings will battle it out to be crowned IPL champions 2018 in Mumbai Scheduled to start on 27th May the live action begins at 19:00 local time CSK vs SRH . Dream11 Prediction of HYD VS CHE FINAL is given in this post.

Venue:Wankhede Stadium, Mumbai. Stadium has seen 180 generally equate to a winning score but recent matches have seen pacemen like Andrew Tye Jasprit Bumrah and Jofra Archer return some impressive bowling figures. We generally see here a neutral pitch with some help for all departments. Pitch generally get slow as the game progresses.

Venue Stats: As per stats of last last 64 matches Played in which 33 won by 1st batting and 31 matches won by chasing.

Players To Watch out for HYD VS CHE :

For Sunrisers hyderabad vs Chennai super kings , Chennai Super Kings’ play-off victory was their eighth win in ten matches against Sunrisers Hyderabad and third of the 2018 tournament. They had previously not met since 2015, of course, as a result of the Super Kings’ two-year IPL ban.

So! Who Will Win SRH VS CSK . Chennai Super Kings may have the better record against Sunrisers Hyderabad, but their form has been inconsistent. Sunrisers Hyderabad have returned to winning ways in perfect time, and with the leading run scorer and two of the three leading wicket takers in their line-up, they have the quality to upset the odds.